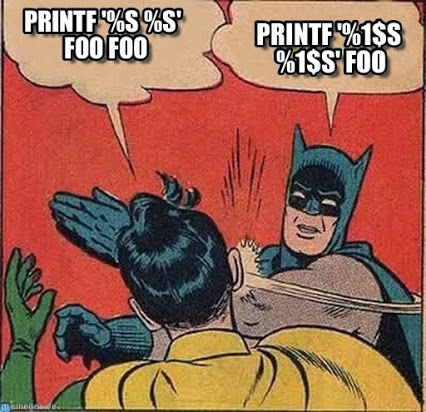 I was recently asked on GitHub why would someone use fmt::printf, which is a part of the C++ Format library, over the standard C library printf. This is a fair question and so I decided to write this blog post comparing the two.

Disclaimer: I’m the author of C++ Format, so this is all very biased =).

Whenever I mention printf without a namespace in this post I mean the whole family of printf functions from the C standard library, including sprintf and fprintf. The C++ Format library includes its own implementation of printf which resides in the fmt namespace, so I’ll use qualified name fmt::printf to distinguish it from the standard one.

The main difference between printf and C++ Format is the way they accept formatting arguments.

printf uses the mechanism provided by the C language sometimes referred to as varargs. This mechanism is inherently unsafe because it relies on the user to handle the type information which, in the case of printf, is encoded in the format string together with formatting options. GCC provides an extension, __attribute__((format (printf, …)), that partially addresses safety issues. However, this only works with format strings that are string literals which is not always the case especially when strings are localized. Also not all C and C++ compilers support this attribute.

C++ Format uses variadic templates introduces in C++11 and emulates them on older compilers. This ensures complete type safety. Mismatch between the format specification and the actual type causes an exception while in printf it often leads to a segfault.

Here’s a small artificial example that illustrates the problem:

Let’s compile and run it:

Note that GCC doesn’t even give a warning with -Wall -Wextra -pedantic.

As was pointed out in one of the comments on Reddit, you can get a warning with -Wformat-nonliteral. As the name suggests, this will only warn you that the format string is nonliteral.

Let’s compile and run it:

As you can see the error is reported as an exception that can be safely catched and handled. C++ Format doesn’t do compile-time checking of literal format strings though.

It is often said that printf is not extensible and doesn’t support user-defined types. This is not entirely true as the GNU C Library provides some extension mechanisms. However, as with attributes, they are not standard.

The current version of C++ Format can format any type that provides overloaded operator<< in addition to all built-in types, for example:

Note that the above example uses Python-like format string syntax which is also supported (and recommended) by C++ Format.

Since C++ Format manages type information automatically, you don’t have to encode it in the format string as with printf, so the same default format specifier {} can be used with objects of any type. This can also result in shorter format strings as format specifiers like hh or ll are not required any more.

Being part of the C standard library, printf is available pretty much everywhere, but the quality of implementations widely vary and there are inconsistencies between output on different platforms especially with floating-point numbers.

C++ Format has been tested on all major platforms and compilers. It provides consistent output across platforms and implements POSIX extensions for positional arguments that are not available in some printf implementations.

According to the code bloat benchmark, C++ Format adds about 10% to the optimized code size compared to printf. The additional size comes from the type information that is passed alongside the formatting arguments.

In practice, increase in binary size when switching from printf to C++ Format is small and, of course, depends on amount of formatting done by the application. For example, when 0 A.D. switched to C++ Format, they reported only 3% increase in binary size on older version of the library (statically linked) which was more affected by code bloat. On the current version it would be even smaller.

Memory management is related to safety, but I think it deserves a separate section not to mix with type safety issues.

sprintf relies on the user to provide large enough buffer which may easily result in buffer overflow. This issue is addressed in snprintf where you can pass buffer size. Unfortunately, it is rather awkward to use if you want to grow your buffer dynamicaly to accommodate large output as the following example taken from the snprintf manpage nicely illustrates:

C++ Format allocates buffer on stack if the output is small enough and uses dynamic memory allocation for larger output. This is all done automatically without user intervention. For example, in the following code everything is allocated on stack:

If necessary you can specify a custom allocator to be used for large output.