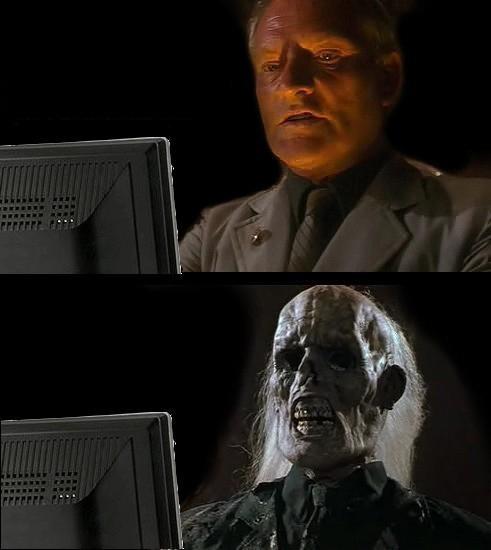 In the previous blog post I described how to catch errors early at the cost of somewhat increased compile times. In this one, I’ll explore the other direction and discuss reducing compile times, again using the fmt library as an example.

Variadic templates are awesome, they enable natural function-style APIs where we previously had to get by with, often confusing, operator overload. For example, compare

Can you even tell from the top of your head which operator, % or <<, has higher precedence?

This makes the code much faster to compile and reduces the code bloat at the minor cost of a dispatch on an argument type at runtime. This cost is negligible compared to the actual formatting and parsing, and fmt can still easily beat glibc’s printf.

To illustrate the effects of this technique, let’s compare fmt to Folly Format, which wires variadic templates throughout the formatting code, on a test that compiles and links 100 translation units each having a few formatting function calls.

As you can see, this gives us ~4x better compile times (although variadic template instantiation is not the only factor here) and we’ll see if it’s possible to improve even more using other methods.

This is related to previous item because variadic templates are often used together with recursion. In some cases it is possible to avoid recursion, for example, in version 3.0 of fmt recursive templates where replaced with array initialization (thanks to Dean Moldovan), along the lines of

This gave a big improvement in compile times, especially for large number of arguments: 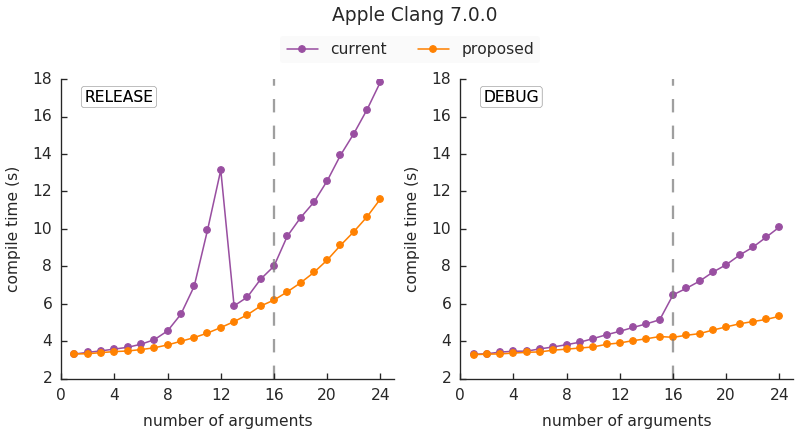 Balance the work done at compile and run time

No work is less work than some work.

Doing less work at compile time seems like an obvioius thing and it’s not specific to C++ or AOT compilation for that matter. For example, as I reported before, formatting in Julia is spectacularly bad, because they unsuccessfully try to generate “optimal” code for each formatting function (actually macro) call which results in enormous bloat and still performs worse than sprintf that does everything at runtime. Add to this a slow JIT and interactive environment being Julia’s main use case and you’ll get the picture. The lesson that we can learn from it is that there should be a balance between the work done at compile (JIT or AOT) and run time. Is formatting a bottleneck in your application and if it is, does it make sense to try optimizing all the calls or just the ones that actually matter?

The goal of reducing compile times seems to go against improving safety with compile-time checks. Fortunatley, in this case we can have our cake and eat it too because we can already fall back to runtime checks if a compiler doesn’t have proper constexpr support. So we can develop with compile-time checks disabled and enjoy fast compile times and have them enabled in continuous integration and be notified about any errors asynchronously as it is often done with tests.

And if formatting is really a bottleneck in some part of your application, you can use the Write API and have faster formatting at the cost of longer compilation and more generated code just for the translation units / call sites where performance is critical.

There are a few things that can be done to optimize compile-time dependencies:

Also make sure that you optimize for the common use case. For example, the next major version of the fmt library (currently the std branch) will have a lightweight header file fmt/core.h that provides the core formatting API that should cover most use cases. It is just 674 significant LoC and includes 4 standard library headers with <string> being the heaviest.

With the techniques described above, the compile time of the benchmark project using the std branch of fmt has been reduced to 22 seconds or just 220 milliseconds per translation unit. printf is still much faster, but large portion of compile times are contributed just by including <string> as shown by the printf+string line in the benchmark where formatting is still done by printf but we add an extra unused <string> include. This suggests that if modules reduce #include overhead, we’ll be able to bridge the gap between fmt and stdio and, more generally, between compile-time responsible C++ projects and their C counterparts.

Note that this benchmark doesn’t use ccache, parallel builds or precompiled headers so in reality compile times will be much lower.